Wednesday, September 29
12:30-1:30 p.m. (EST)
Virtual Event (link to be provided soon!)
Please join us for a discussion of the role new economic powers in Africa, particularly India, Russia and with a primary focus on China. China is today the biggest economic actor in Africa, followed by India and to a lesser extent, Russia. The talk reviews Chinese trade and investment policies and the increasing challenge of debt  by so many African countries. There are, of course, good and bad aspects of Chinese economic involvement in Africa. We review these and compare them to countries such as Russia and India nurturing their own ambitions on the continent. China is investing in Africa for the long haul. They have patience and they will wait for their investments to bear fruit.

Our speaker, Dr. Mailafia, believes China is adopting a "tributary state" framework in its dealings with Africa to get maximum pay-offs from such a relationship and African countries must keep their home in order. They must be  more vigilant in negotiating deals that bring real value-added to their countries. Same goes goes for Russia and India. Mailafia concludes, the emerging economic powers in Africa are also challenging the traditional dominance of Western countries, particularly the USA and the European Union. Both will need to change their approaches if their influence is to continue to be meaningful in Africa in the 21st century. 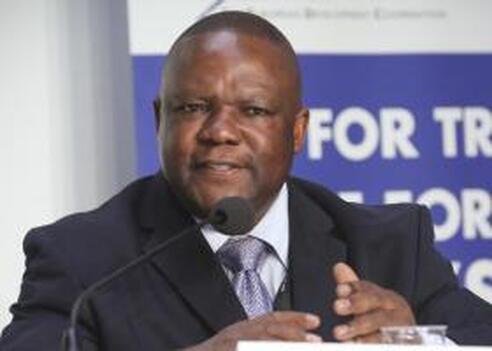 About the Speaker:
Dr. Obediah Mailafia is a former Chief Economist in the Planning and Budgeting Department of the African Development Bank, Chef de Cabinet of the African, Caribbean and Pacific (ACP) Group of States, Brussels, (2010-2015), and Directing Staff and Chief Operating Officer of the Centre for Financial Economics (CFE) at the National Institute for Policy and Strategic Studies, Kuru, Nigeria. A former Deputy Governor of the Central Bank of Nigeria and a member of its Board of Directors, Mailafia is a development economist, finance expert, strategist and international development specialist with over 25 years experience. He is an internationally recognized authority on EU and ACP trade and development cooperation and was a presidential candidate in the 2019 Nigerian elections.

The World Affairs Councils of America is excited to welcome all of you to the WACA 2021 National Conference this November 16-19 in Washington, DC, where we will celebrate our 35th Anniversary as a national association! For nearly four decades, the WACA National Conference has brought World Affairs Council leaders and members to engage with top government officials, diplomats, business executives, innovators, journalists, educators, and students on the most pressing global issues and policy choices that impact our lives.
​For details and registration, please visit, wacaconference2021.org

Below is a list, updated weekly, of virtual events hosted by World Affairs Councils
​around the country - available to all CWAC Members!
Programming on Afghanistan
Member Councils in recent weeks have provided extensive insight into recent developments in Afghanistan. On August 31, WACA President Bill Clifford hosted a Cover to Cover discussion with Craig Whitlock, investigative reporter for The Washington Post on his book, The Afghanistan Papers: A Secret History of the War.

Colorado Springs World Affairs Council will host Trita Parsi, Co-founder and Executive Vice President of the Quincy Institute for Responsible Statecraft, for “U.S.-Iranian Relations: After the Election, Will There Be War or Peace?” (In Person)

World Affairs Council of New Orleans hosts Michael Kugelman, Deputy Director of the Asia Program at the Wilson Center, for “Great Decisions: The U.S. War in Afghanistan: The History, the Costs, and the Withdrawal.”

Thursday 9/9
World Affairs Council of Greater Houston hosts Madiha Afzal, a Foreign Policy Fellow at Brookings, and Stephen Tankel, former Senior Advisor at the Department of Defense, for “Al Qaeda & ISIS, the Fall of Afghanistan and the Terrorist Threat to the U.S.”

Los Angeles World Affairs Council and Town Hall hosts Dr. Julie Battilana, Professor of Organizational Behavior and Social Innovation at Harvard Business School, and Tope Ogundipe, founder, director, and lead consultant of TechSocietal, for “Power, for All: How It Works and Why It’s Everybody’s Business”

World Affairs Council of Charlotte hosts Ambassador (Ret.) Ryan Crocker, former U.S. Ambassador to Afghanistan and Dean and Executive Professor at the George Bush School of Government & Public Service at Texas A&M University, for "Afghanistan: Where Do We Go From Here?"

Sunday 9/12
World Affairs Council of the Desert hosts Christopher Sands, Director of the Wilson Center’s Canada Institute, for “Is the Era of Close Canada/U.S. Relations Over?”

April 12-13
Teaching the Past in the Future Series, a Goethe Institute/Deutschlandjahr program of the Hanns Seidel Foundation in association with Centropa, USC, and the Columbia World Affairs Council

May 22
Taiwan-United States Relations and the 40th Anniversary of the Taiwan Relations Act with Distinguished Speaker Vincent Jing-Yen Liu, Director General of the Taipei Economic and Cultural Office in Atlanta

May 29-June 5
Stars and Stripes over the Rhine: The American Occupation in Germany after World War I (1918-1923) exhibition at the Koger Center for the Arts, in partnership with the Atlantic Academy (Kaiserslautern, Germany), University of Mainz, and the WWI Centennial Commission. A Wunderbar Together program

July 18-August 15
Glory & Gratitude to the United States exhibition at the Koger Center for the Arts, in partnership with the Consulate General of Belgium in Atlanta, Honorary Consulate of Belgium in South Carolina, and FN America, LLC

August 1
Boris Johnson and the Future of Brexit with Distinguished Speaker Alexander Hall Hall, Chief British Brexit Counsellor to the US

August 17
Polyglot Meet-Up, with all CWAC language conversation groups, at World of Beer

August 19-September 27
Belgium Comic Expo in Columbia: Highlights of Belgian Comic Strip Art exhibition at the Koger Center for the Arts, in partnership the Consulate General of Belgium in Atlanta & Honorary Consulate of Belgium in South Carolina

September 18
Exploring the Cuisine and Culture of Ghana, Taste of the World Dinner at Asanka Kitchen

March 13
The Risk of War with Iran: a talk and book signing by Trita Parsi

March 15
The Political Crisis of March 2009 in Madagascar: A Case Study of Conflict and Conflict Mediation with guest speaker Dr. Adrien M. Ratsimbaharison

May 16-23
CWAC/City of Columbia Economic Development and International Relationship Mission to Paris, France and Liege, Belgium

September 28
Teachers on the Global Stage: The surprising educational connections between Romania and South Carolina. A panel discussion and reception w/ USC's College of Education

March 14
Taste of the World Dinner at Il Giorgione

April 6
Reception for Ambassador Budimir Loncar, former Yugoslav Ambassador to the US

April 20
Jihad in Hollywood: An Evening of Film, Art & Music with Syrian artists Jihad Abdo and Fadia Afashe at the Columbia Museum of Art

April 28
Reception for the Beyond Bollywood: Indian-Americans Shape the Nation exhibition at the South Carolina State Museum with Pratik Mathur, First Secretary, Embassy of India

July 12-21
South Carolina Estonia Trade Agreement delegation to Estonia led by Harry Huge, Honorary Consul of the Republic of Estonia for the state of South Carolina

August 30
Women’s Economic Advancement and Policy: A Look Abroad and at Home, a panel discussion with CARE USA and the Women’s Rights and Empowerment Network

September 26 & 27
Future of Korea series with the Embassy of the Republic of Korea, Korea Economic Institute (KEI), and the U.S. Department of State. Sponsored by the World Affairs Councils of America and KEI

November 13
Islamic Art: Mirror of the Invisible World film screening and discussion with artist and author Steven Naifeh at the Columbia Museum of Art, in partnership with the Carolina Peace Resource Center and USC’s International Education Week

December 1
Artist Salon: Poetry in the Galleries at the Columbia Museum of Art with the French Conversation Group in connection with the Henri Matisse: Jazz & Poetry on Paper exhibition